I'd I Knew It Was My Last Moment?? 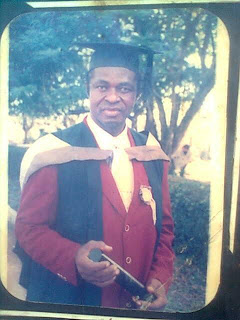 In joy and happiness I traveled home to announce the latest milestone of my academic breakthrough and a new journey of greatness. Got home on a Friday evening after a lengthen journey of about 4 hours and the house was in lock and key, party and celebration was on in the next compound and music bubbly the air. Daddi! Daddi!! (daddy) I called, the response I got was the echo of my voice. Just in minute I was wondering the where about of my dad, and then a young lady walked up to me and said, he is the Chairman of the event a distance away from my view point. Then I took a deep breathe, walked majestically in anticipation to salute
my name same, "Daddi Mo" (good-day father) I greeted in prostration, in response he said, "ogbor" (how are you) and in reply I said "opunu" (fine). As usual, always please to see me, the last born of his strength, the Joseph of his eyes, the one he bequeathed so much trust and hope on. He smiled in happiness as we walked back home with the usual chitchat question and answer stuff, and with a proud smile on his face, a smile of a man proud of a glorious son making him proud, with the name Imoesi hitting high and low places. We got home and he handed over the keys to me, and he said will you be in need of the car? in response I said "e ye" (no) and he said see you later going back to the occasion. Hey Dad I yelled back at him and he said what? just a pix with you, and with my smartphone I took several shot........ 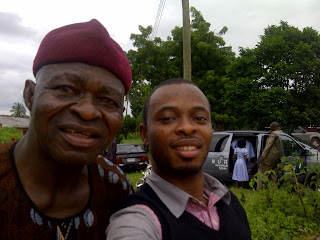 At night he came home just me and him, we eat in silent and peace and I said Daddi, that stuff I had in mind as finally clicked and in his beautiful usual smiles, he smiled at me. As a well read father, a Bachelor of Art (B.A) holder in English Education, and a core educationist he said congratulations, with a arm stretch he shock me with a warm and firm handshake. Congratulation is always is first pronouncement at anyone that excels. You know am always proud of you, and I know you will always be great and make me proud, I have no doubt about that..... Those words boosted in me inner joy and happiness, that my dad is pleased with my achievements thus far. Indeed I was proud cos he said he had no doubt about my ability and capacity to do well in whatever I chose to. In recap he said "olaso" (meaning it will be well). Once again he said congratulation, thank you Sir I responded. Cos when it comes to deep expression of my thoughts and feelings I switch over to English as my best language of expression against my mother tongue. We discussed late into the night and we went on and on and on, again he said "egbe nwumhe ne so so" (am so happy for you).......... Finally he said goodnight see you tomorrow. If I'd knew that would be his last goodnight son?? sigh!!!

The following day as against the one week I'd proposed to spend with him, something came up and I drove out of the village. Drive safely he said to me...... Never knew that would be the last face-to-face conversion with my papa...  The last moments, the silent goodbye message in the hidden truth of reality, the mystery in the air prearranging event without us knowing the reasons for every action(s) behind our motives, if only I knew those where my last moments with him I would have done something different from the ordinary, something unique from the usual techniques and style. I said wait for me till I return, today he is waiting for me in heaven till am called home in answering the call of nature......

He was called Sir P. I. Imoesi, but I called him Daddi (daddy), he was called "olome" ( my husband) the father of my children by his lovely wife with the usual sonorous tone- "Eri Prici" (Priscilla's Dad), she called him most times by the first daughter's name, but I called him Father... He was called Sir by his fellow Knights, but I knew him as my Papa. Some called him HM (Headmaster) since he was a Principal, but I knew him as "Eramhe" (My father)...  His parents, my grandpa and grandma called him Idinokia, and at birth, the first name he called me was Idinokia Imoesi, hence I became a clone of his image, the Mayor to a Major, the Junior to a Senior P. I. Imoesi.. A replica and carbon-copy of his identity....

Today I look back memory lane, I'm fed with the bitter truth of a journey of no return. The news came like the sound of thunderstorm, roaring the earth in great trembling, as a perching arrow tearing my heart apart without mercy or pity. Acidifying and flaming my soul to ashes, a sour soup have got no option but to taste either in bitterness or in happiness. Slapped like a helpless child without a supportive backup or guts to return the unkind favour. Its no long a matter of choice or want, will or no will have got to swallow the bitter pile against all odds.  The truth is, have tasted the soup of agony on the 18th of January 2013. After weeping all through the night over the untimely death of an in-law.  Before retiring to bed I spoke to my brother through a phone conversation and finally called my Mum to saying good-morning and to asked after my Dad's well-being since he wasn't responding to my calls. She said your Dad is fine. With the assurance in her voice, I slept with little comfort, but my mind was truly disturbed cos unlike my Dad, he would always return my calls at the sight of the missed calls on his phone. Right within me I had the feelings of expect the unexpected......

Just exactly 15 hours after losing a dearly beloved in-law and receiving the news through the social network- facebook, was the down pour of calls to my phone, reluctantly I looked, it was my brother and I said to myself call you later. In the middle of my sleep my laptop drop a facebook "pom sound" with sleepy eyes I gazed at the message, it was my brother's facebook inbox message "Daddy is dead he as gone to rest in the bosom of the Lord".  My fears have finally caught up with me, the mighty and irresistible wind breaking me asunder, the bitter and corrosive news of  acidic rain eroding the grass of the field without apology, the high and placed Iroko tree smashing the ground without consideration of status and rank, the mighty warrior of books and phonetics losing grip of his rhetoric prowess to a stronger power, a Pen and paper General that fought many battles, ate and drank with high and mighty, survived several road accidents and basic life ordeals, but at the call of nature effortless he kick the bucket without explanations. I cried and yelled, no one to console me, called my mum on phone in tears and pains I wept, speechless I was and she said "agevhe" (stop crying). They say until a boy loses his father, only then he turns into a man, never knew the meaning  and depth of the phase until 18th of January, 2013. A tasteless sour soup, have got no option order than to taste the ugly bitterness of the current reality.....

Today he is gone here I am, what is next for me I can't speak of; with countless degrees, all seems meaningless to me now. With standing ovation and hailing from the crowd, to me is vanity.. What is left of a young cub like me, is left for the final decision Maker's hands to decide...... I write still, but the only way to blow-out my fury steam. Inside I burn in flame, on my Achilles's heels of bravery I fall.... Like a baby I cry in pains and sorrow, my eyes red and swollen..... Today, right now my heart pricks in pain, thinking if I will survive the next rays of sun light... Am fast becoming a shadow of myself, casting away at the spot of sun light...... What will a young cub do in a jungle of vipers and unfriendly beast waiting to crush him to pieces? At 65 years of age my beloved Dad is gone, faded away into the blues, only in my dreams and memories we communicate now and see... His voice like the still distant waters of the stream flowing gently in my soul. Mere thought and sight of his last pix with me is like two-edged sword cutting my flesh to pieces. Oh dad!!! Dad you never said goodbye to your son directly.....
Dropping your comment after reading this may make a great difference in the life of this writer, this is my true life story..........

The two lovely poems from my Love keeps breaking my heart more and more;
The winds have howled
The trees have swayed
The loose house-top sheets have clattered and changed
The open window has shut in bang
The storm as raged
The big rain as fallen
The hawk as carted away with the elephant
An elephant as fallen
The Imoesi family are bereaved
Ayogwiri people are grieved
The eyes of the children are red
The earth is about to be fed again
The drum that ushered in the transition is still rolling down streams of tears

You are gone with the winds
Never to return again
Only in the dreams shall we see
Only on the crackles of fire
In the wind and sobbing of the tree shall we hear your voice again
Safe journey
Sleep well......
Adieu Papa!!!!